CLICK HERE to listen to the evolution of the Rocky Statue being placed at the Philadelphia Museum of Art narrated by A. Thomas Schomberg, the sculptor who created Rocky and  James J. “Jimmy” Binns,  who is responsible for placing the statue at its current  location.

“I met Stallone when I was boxing commissioner. I met him at Bookbinder’s. He was making a new movie and asked me to be in it…”

“Jimmy’s a character straight out of a pulp-fiction novel.”

Fight fans from this city all know the name Binns. James J. Binns is not just a guy from the old working-class neighborhood of Mayfair. He is definitely an anachronism, something that shouldn’t be around anymore but still is for some inexplicable reason. Jimmy is seventy-six years old now and still going strong.

“He’s certainly a man among men. You would think he grew up in the hood somewhere, as opposed to his real background,” said Tom Welsh, assistant squash pro at the Philadelphia Racket Club. But that is the puzzle of Jimmy Binns. You can’t miss him on the street. He always wears a custom tailored Italian suit, slicked back white hair and a solid gold Rolex on his wrist. He seems to have his feet planted in two different worlds, one in the law, the other in the ring. Let’s take a closer look at this guy.

Young Binns learned to box while at La Salle College. His trainer was one Franny Venuti, at a gym on Passyunk Avenue in South Philly. Joey Giardello and Sonny Liston worked out there too. Jimmy had two years of training there as an amateur boxer. He must have taken the advice of Apollo Creed, “Stay in school…Use your brain…” He went to law school at Villanova University on the Main Line.

Jimmy will take on any kind of court case that challenges him. He specializes in anything and everything. For example, in 1981, the Philadelphia Federation of Teachers needed a fighting lawyer for a nasty labor strike with then Mayor Bill Green. The grinding negotiations between the two sides went on for weeks, often twenty-four hours a day. In the end, the young mayor lost the strike on points. The union got the decision. Jimmy billed union president John Murray, for so many hours in that case, that he was able to buy a swank summer home in Margate, New Jersey. Neighbors jokingly call his shore house “The ’81 strike…” He gets along so well with the cops down there that he once dressed up like a Margate police officer for a parade, gun and all. He also has a full Philadelphia Police Highway Patrol uniform, including a .40 caliber Glock automatic. Somehow Binns also came up with his own Harley-Davidson Police package motorcycle, which he rode in Hero Thrill Shows for fallen police officers. He has gotten so much in the way of free bikes, motorcycles and horses for various police departments that the boys in blue sometimes look the other way when Jimmy steps over the line a bit.

Binns can get congressmen, senators and even some wise guys on the phone at a moment’s notice. I’m talking about characters like Al Dente, from Broad and Porter Streets in South Philly. Yeah, the real Al Dente, not the firm spaghetti!

As a lawyer Binns has won thirty-one straight cases for the World Boxing Organization. The names of the vanquished are familiar, Muhammad Ali, Tim Witherspoon, Evander Holyfield, Marvin Hagler, Top Rank, Don King, and Mike Tyson. Binns is ranked in the top five percent of Pennsylvania lawyers and was named a Super Lawyer by his peers at the Philadelphia Bar Association. He was inducted into the Pennsylvania Boxing Hall of Fame in 1984. 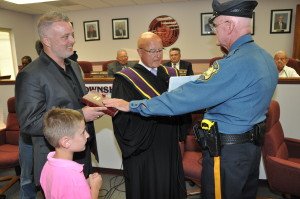 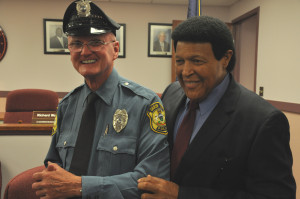 On May 25th, receiving the Partnership Award from Fire Commissioner Lloyd Ayers and his Command Staff at the Philadelphia Fire Academy.

On May 14th, dedicating Hero Plaque 265 in memory of Battalion Chief Albert
Stevenson, Lt. Thomas Kelly, Hoseman John Green, Hoseman Thomas Ennis,
Hoseman Charles Zoor and Ladderman Harry LaGrand, all of whom died together
in the line-of-duty on July 12, 1919. 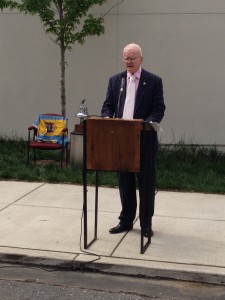